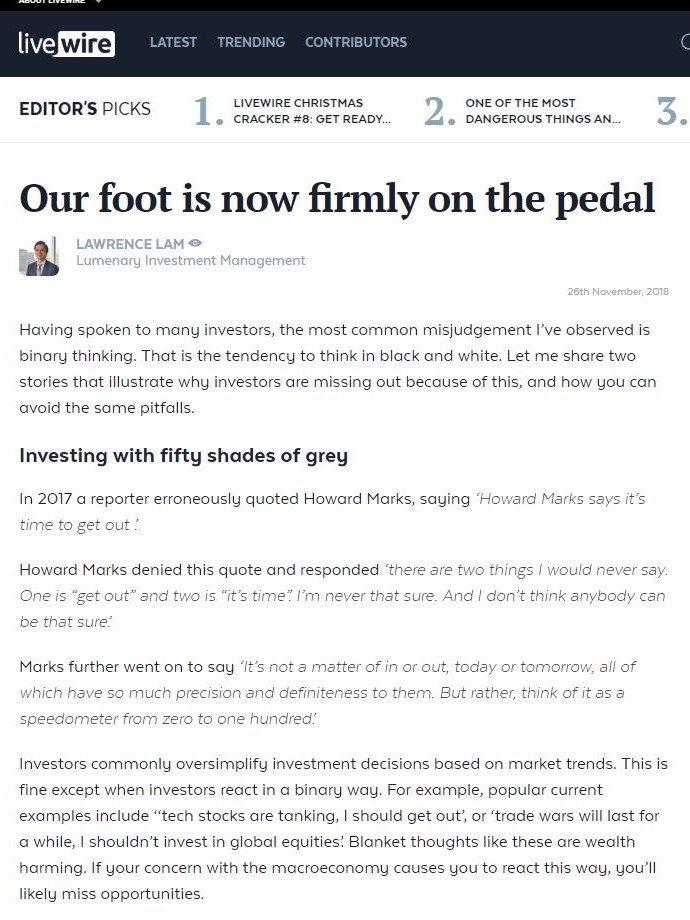 Our foot is now firmly on the pedal

This article was first published on Livewire Markets
______

Having spoken to many investors, the most common misjudgement I’ve observed is binary thinking. That is the tendency to think in black and white. Let me share two stories that illustrate why investors are missing out because of this, and how you can avoid the same pitfalls.

Investing with fifty shades of grey

In 2017 a reporter erroneously quoted Howard Marks, saying ‘Howard Marks says it’s time to get out ’.

Howard Marks denied this quote and responded ‘there are two things I would never say. One is “get out” and two is “it’s time”. I’m never that sure. And I don’t think anybody can be that sure.’

Marks further went on to say ‘It’s not a matter of in or out, today or tomorrow, all of which have so much precision and definiteness to them. But rather, think of it as a speedometer from zero to one hundred.’

Investors commonly oversimplify investment decisions based on market trends. This is fine except when investors react in a binary way. For example, popular current examples include ‘‘tech stocks are tanking, I should get out’, or ‘trade wars will last for a while, I shouldn’t invest in global equities’. Blanket thoughts like these are wealth harming. If your concern with the macroeconomy causes you to react this way, you’ll likely miss opportunities.

Right now general sentiment is negative. Human nature impels us to steer clear of equity markets. But don’t think in black and white. You have the option of adjusting your allocation to cash or stocks to capture today’s sentiment. You don’t need to be fully in or fully out of the market. In the past year, we’ve had our speedometer at 50.

But in the past few months, companies we’ve been stalking for a while have fallen into bargain territory. Our foot is now firmly on the pedal and we’re now cruising at 80, having recently snapped up a few quality buys.

Why you shouldn’t read the news

As humans, we are attracted to extreme statements. They capture our attention. We like them because they simplify how we see the world. They give us a short internal summary which we can easily file away in our memory bank. But the world is complex and investment opportunities are not black and white.

Right now all the economic headlines are negative. But it was only at the start of the year that the market was bullish. Headlines change on a dime. Whilst this makes for entertaining reading, they shouldn’t be used to form investment decisions. Journalists are here to sell papers after all.

Instead, investors should focus on the detail underpinning each company. There are always companies that make money even in the most dire economic environments (example below). Excellent investment decisions are made with a scalpel, not a hammer. It is the perception of a company’s prospects that can change overnight, not the actual prospect itself. Actual prospects often take years to play out. So read the company news section, not the economic headlines.

We’ll use Nike as an example given we’re an investor and I’m very familiar with them. Binary investors relying on economic headlines in 2008-2009 exited equities altogether based on 2009 headlines such as ‘The biggest crash since the 1930’s will take decades to recover’ and other similarly extremist views. Nike’s share price fell 20% and yet earnings were increasing through the GFC.

Investors who studied the company rather than the headlines would have reaped a handsome 400% reward over the ensuing 10 years. 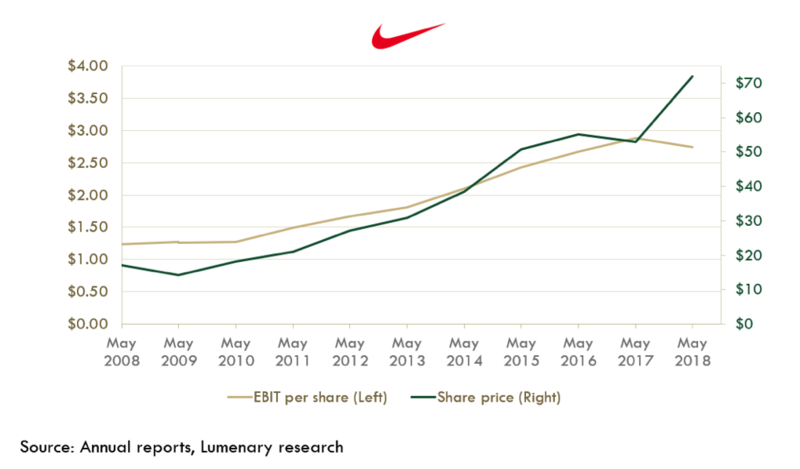 There are successful companies in every country and in every economic environment. You just need to look for them. Be influenced by macroeconomic headlines at your peril.

Investors can’t be blamed for thinking in extremities given recent news. But relying too much on popular sentiment can lead to missed opportunities. As the herd is withdrawing, quality companies are becoming better value.

For this reason, we are stepping on our accelerator.

If you find yourself following headlines, just keep the following quote in mind:

‘No one goes there nowadays, it’s too crowded’ – Yogi Berra.

This doesn’t just apply to industries and stocks, the sidelines can get overcrowded too. Remember it’s not just about Afterpay, or not Afterpay, Aussie or international. Oceans of quality companies in a range of industries and countries are thriving in today’s economic conditions.

If you believe the news, you won’t look twice.

And if you don’t look, you’ll regret missing the opportunities once this hoo-haa inevitably passes.

Pick up your scalpel, and happy compounding. 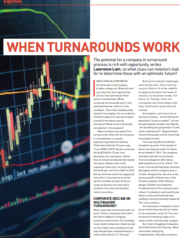 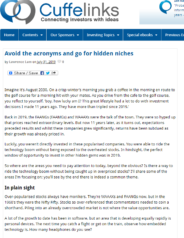