This article was first published in Money Management magazine, 8 October 2020

Why do some sports teams remain perennial title favourites, while others seem to consistently languish for decades? If you’re one of the poor souls who finds themselves rooting for the frequent losers, you’ll know the answer isn’t simply ‘our players aren’t up to scratch’. On the other end of the spectrum, the best teams always seem to have an ability to combine mediocre players into a high-performance unit. They seem to be one step ahead of the competition, playing a long game that presciently fills the gaps in their rosters, drafts the best rookies before others spot them, and adapts their capabilities to the evolution of the sport. This is where the behind-the-scenes manoeuvres of the front office management team lead to long-term dominance. These imperceptible strategic decisions go beyond the coach and players, they are macro decisions that create long-term franchises. In investment parlance, asset allocation is exactly those front office decisions you need to make correctly to ensure long-term success. In this publication, we’ll take a deep dive into how two of the world’s best are manoeuvring their portfolio for the future. 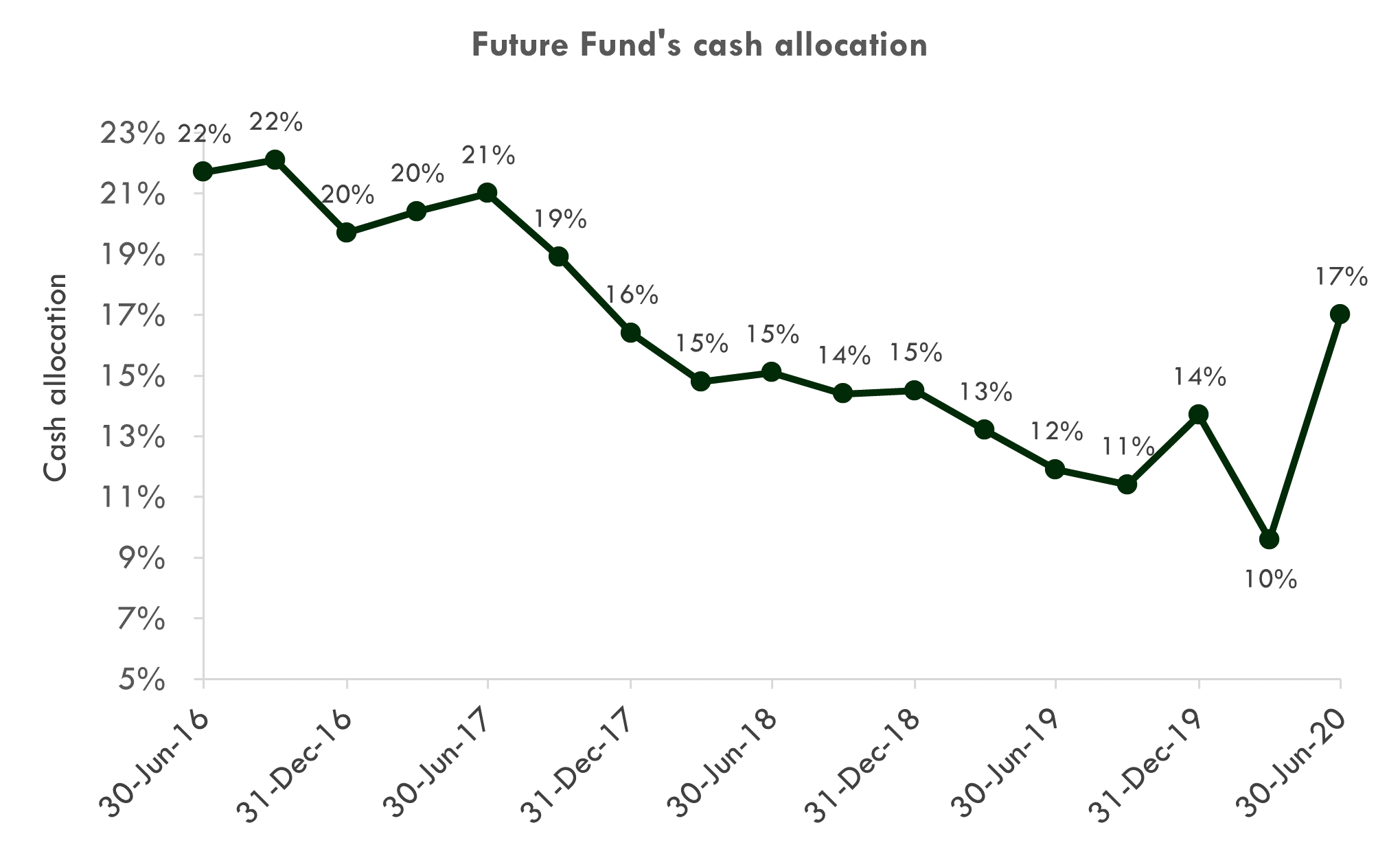 Yes, this does have a little to do with the pandemic, but notice many of the changes were in relation to unlisted assets which take some time to turn over – in other words, many of these liquidations were premeditated and only just came to fruition last quarter. This was far from a spur-of-the-moment reaction to the pandemic.

But just because your cross-town rival makes a change to their team doesn’t mean you should too. Future Fund’s circumstances are far removed from a nimbler private investor and their investment objectives are vastly different. The best sporting teams never emulate the success of others, they create their own success based on independent evaluation. As I delved deeper, the question emerging in my mind was “What can I learn from the intentions of a $161 billion fund, so I can anticipate the next flow of capital, not copy it?”

The bigger they are, the slower they move – but that’s your edge

Delving deeper to uncover the rationale, I found the Future Fund’s CEO had spoken publicly about the portfolio, citing long-term falling interest rates as the cause of asset prices being bid up, which has subsequently led to their cautious view of the world. He went on to explain why he expected headwinds going forward, summarising the year with:

“This year we undertook a material rebalance of the Private Equity portfolio, reducing some of our exposure to international growth and buyout managers following a period of very strong performance. We also completed the sale of other unlisted assets including Gatwick Airport. We deployed some of that capital into new infrastructure themes including fibre and data centres, in Australia and offshore.”

Readers who only skimmed the negative headline would be tempted to cash in the chips and stash money under the pillows. Tempting as it is, I would caution against that. Near-zero rates are fine to accept over the short-term, but a 1% return on cash will destroy wealth over the long-term.

Delve deeper. Future Fund’s high levels of cash are a result of a recent sell down of private equity and partial re-allocation to new infrastructure themes. Enterprising investors can expect this capital to be recycled at some stage, especially as cash returns continue to drag. Expect Future Fund to redeploy this capital, but it will take time. As they’ve already alluded, their capital will continue to flow into non private equity opportunities over the coming quarters. The opportunity now is for investors to move ahead of the pack, to anticipate where this money will land; if June 2020 is anything to go by, increasingly it will likely be in the form of exposures to telecommunications and associated technology infrastructure. If we move up the value chain, we can expect companies in programmable communications and internet infrastructure to create significant value over the long-term, especially when the adoption of 5G and IoT products become mainstream with improved reliability.

As the game evolves, the best management teams recruit the players that will take them to the next level. They have an innate ability to anticipate the direction of others and make decisions ahead of time. Knowing global equities is Future Fund’s largest allocation piqued a broader question in my mind – who else, globally, has a formidable strategic long game?

I found particular US Ivy League endowments have done quite well over a long period of time. In particular, Yale and Harvard are the standouts, returning 13.7% p.a. and 11.8% p.a. over the past 20 years. They have greater discretion, tend to be more flexible with their risk/return requirements and don’t have the bureaucratic approach typically seen in sovereign funds (they aren’t accountable to the entire population, after all) – Ivy League endowments run a leaner, more agile operation.

Delving deeper into Yale’s approach, I found one quote which succinctly summarises their mindset:

“Over the past three decades, Yale dramatically reduced the Endowment’s dependence on domestic marketable securities by reallocating assets to non-traditional asset classes. In 1989, 65% of the Endowment was targeted to U.S. stocks and bonds. Today, target allocations call for 9.75% in domestic marketable securities and cash, while the diversifying assets of foreign equity, absolute return, real estate, natural resources, leveraged buyouts and venture capital dominate the Endowment, representing 90.25% of the target portfolio. The heavy allocation to non-traditional asset classes stems from their return potential and diversifying power. Today’s actual and target portfolios have significantly higher expected returns than the 1989 portfolio with similar volatility. Alternative assets, by their very nature, tend to be less efficiently priced than traditional marketable securities, providing an opportunity to exploit market inefficiencies through active management.”

From their latest annual report, their asset allocation looks like this: 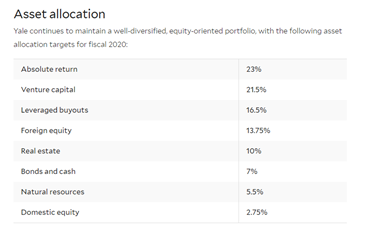 This allocation is notably different to the Future Fund’s and Temasek’s of the world, and I would not suggest replicating this structure in entirety; Yale has a significant allocation to venture capital (‘VC’). They have pioneered this space in the endowment world, and off the back of the tech boom have returned about 20% p.a. just from VC investments. They have been able to achieve this by good alumni connections and have preferential deal access that most won’t have.

It’s not the strongest, but the most adaptive

Instead of replicating Yale, investors can borrow some of the underlying principles to improve their existing framework. Notice how the top three allocations are foreign equity, venture capital and absolute return? Most investors have limited access to these asset classes. Coincidentally, or rather not so, they happen to overlap with Yale’s connections with industry. Even though Yale can source the world’s best next-generation investments from around the world, it doesn’t mean other investors can’t also win. Just because other teams have a greater salary cap or more talent scouts, doesn’t mean they will assemble a franchise team. Investing is a game with more than one winner; it rewards resourcefulness and adaptability. If the pundits are right, we’ll be heading into a low-return environment but if you borrow from Yale, investors can mitigate this by focusing on companies with a high growth trajectory – not the old-world companies, but the ones creating new markets never-before-seen in the world, even in a low-growth world, products that add value to our lives never go out of fashion. Investors should be looking globally for the best, not just sorting through our own backyard. The best-of-breed have decades of growth runway ahead, so even if you miss the VC opportunity, plenty of opportunity still remains post-IPO.

Adapting to change is how the best front offices build franchise teams. They combine the right mix of the tried-and-tested players but continue to inject new blood with rookies that fill the gaps for the future. Much is the same in investing; building a portfolio of the best companies now is equally important as paying heed to future growth areas.

It’s not the biggest budgets and the highest paid teams that win, it’s often the ones that have strategic foresight that don’t emulate others, they build their own strategy. Based on actions taken by Future Fund so far, investors have the chance to move ahead of the pack, particularly in global technology-related infrastructure companies. As the pace of reliability and adoption increases, capital will continue to flow heavily into companies that create new markets and products useful to our changing lives. In other words, build a team with solid performing players, but keep your eye on rookies and anticipate where capital will next flow.

Lawrence Lam is the Managing Director & Founder of Lumenary, a fund that uncovers the best founder-led companies in the world. We invest in unique, overlooked companies in markets and industries beyond most managers’ reach. We are a different type of global fund – for more articles and information about us, visit www.lumenaryinvest.com 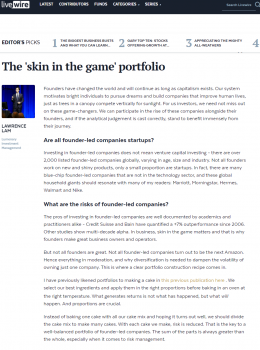 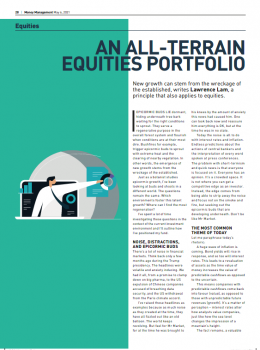